Protesters demonstrate against the Trans Mountain pipeline expansion in May 2018 in Vancouver. Building infrastructure is a tricky business for the private and public sector alike. THE CANADIAN PRESS/Darryl Dyck

This article was originally published on The Conversation. Read the original article.

When the Canadian government announced its acquisition of Kinder Morgan’s ownership interest in the Trans Mountain pipeline expansion, it did more than commit the country to the controversial project.

It also entered the complex and globally competitive business of constructing and managing an inter-provincial pipeline — an undertaking only a handful of active investors have succeeded at.

Pipelines, and infrastructure more generally, are risky. This is largely due to the high cost, long-term impact on communities, both physically and economically, and the complex web of stakeholders involved in development, construction, operation and management. 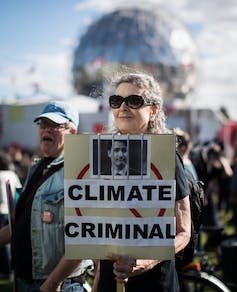 A woman holds a sign bearing a photograph of Prime Minister Justin Trudeau during a protest against the Kinder Morgan Trans Mountain pipeline expansion in May 2018. THE CANADIAN PRESS/Darryl Dyck

As we can see by the vehement opposition to the pipeline by environmental and First Nations groups in British Columbia, the political and environmental risks inherent to pipeline infrastructure can stall projects — to the point that initial business cases supporting them can become obsolete well before shovels hit the ground.

In the case of the Trans Mountain pipeline expansion, what was once an opportunity to transport oil from Alberta has now become a project of national significance, and quite possibly an exercise in nation building.Nonetheless, the project has always been about business — and this is something the Canadian government must quickly recognize if it’s going to create value for Canadians.

Infrastructure is a business

What makes infrastructure such a challenging business enterprise is that the formula for using resources to create value, also known as its business model, differs depending on objectives, internal capabilities and external pressures placed on the project.Much of my research at the Schulich School of Business at York University is premised on the notion that infrastructure is a business. Owners — whether government or private enterprises — look to utilize their resources to create value for their beneficiaries. Value can mean many things, whether a financial return or improvements to the quality of life.

What worked for Kinder Morgan in developing the Trans Mountain pipeline expansion is not likely to work for the federal government, especially because it’s yet to define what it hopes to achieve through its pending ownership stake in the $7.4 billion project.

History has shown megaprojects such as this one are prone to fail if the business model is not well defined nor managed. One study has shown that cost overruns and scheduling delays are common for both government and private owners. This is partly because optimistic projections and poor design serve to aggressively push projects towards construction.

Must manage supply and demand

Even when constructed, the Trans Mountain pipeline expansion will have to move oil from producers and manage demand from shippers at its Western terminals.

With volatile geopolitical forces affecting international trade patterns, the federal government will need to actively manage supply and demand to spur revenue that recovers the capital cost of the pipeline and generates value, whether profit or otherwise, for Canadians.

The world is changing. And so the most important question is what function will this pipeline serve in 20 to 50 years given the transformation of energy sources, demographic shifts, technological change and new business models that are disrupting our traditional notions about transporting people and things?

These forces raise questions not only about the potential obsolescence of the Trans Mountain project, but also its long-term political legitimacy.

In short, managing the Trans Mountain pipeline expansion will be no easy task. The only way the federal government can manage it in a way that generates value for Canadians is to be pragmatic about the project’s objectives and how it can best utilize internal and external resources to achieve those objectives.

In my recent publication in Public Management Review, it was shown that the distinction between private and public financing of infrastructure projects is not as important to meeting objectives as the internal capabilities and management tools of the government organization overseeing these projects.

In the time leading up to the acquisition of Kinder Morgan’s ownership in the project, the federal government must start crafting a business model for its investment. Failure to do so may compromise its ability to create value for Canadians both today and into the future.

Sherena HussainAssistant Professor in Real Estate and Infrastructure, Schulich School of Business
Sherena Hussain is an assistant professor in infrastructure and real estate at the Schulich School of Business, York University and an experienced lawyer in infrastructure development and finance.Professor Hussain holds a combined Juris Doctor-Master of Business Administration degree, Graduate Master Diploma in Real Estate and Infrastructure, and Bachelor of Business Administration. She is the recipient of numerous accolades including the Hennick Medal for academic excellence and multiple prizes in the areas of tax, contract, commercial/corporate, real estate, trust and estate law.

Disclosure statement
Sherena Hussain does not work for, consult, own shares in or receive funding from any company or organisation that would benefit from this article, and has disclosed no relevant affiliations beyond their academic appointment.